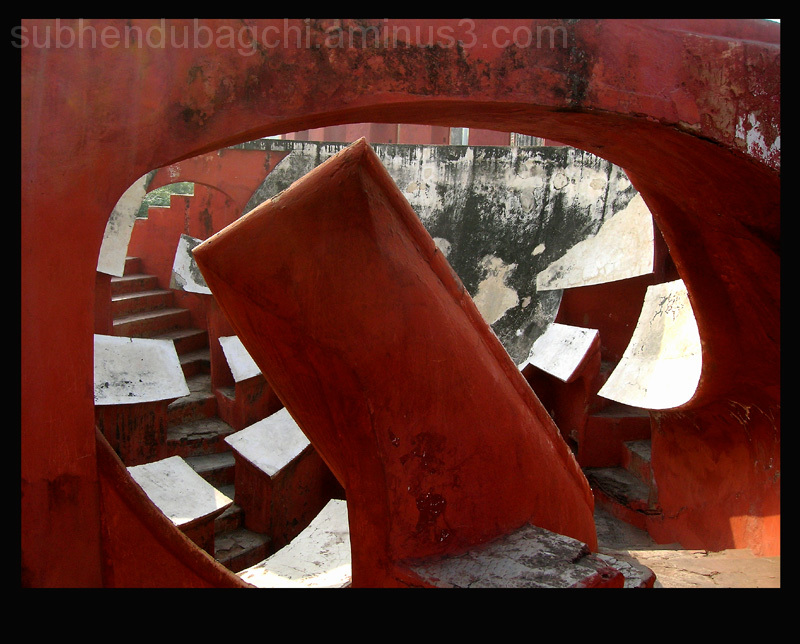 Previous Next
← previous day next day →

Posted by Subhendu (Berhampore, India) on 3 January 2013 in Architecture and Portfolio.

*The 'Q' | Jantar Mantar, Delhi*
.
.
Captured in Jantar Mantar, at New Delhi.
Attracted by the textures... The curves, the lines... Here is it in your screen.
.
Some information about Jantar Mantar:
The Jantar Mantra (literally the 'instrument and
formula' and often
called the Jantar Mantar ), is located in the modern city of New Delhi, Delhi. It consists of 13 architectural astronomy instruments. The site is one of five built by Maharaja Jai Singh II of Jaipur, from 1724
onwards, as he was given by Mughal emperor Muhammad Shah the task of revising the calendar and astronomical tables. There is plaque fixed on one of the structures in the Jantar Mantar observatory in New Delhi that was placed there in 1910
mistakenly dating the
construction of the
complex to the year 1710. Later research, though, suggests 1724 as the actual
year of construction. The primary purpose of the observatory was to compile astronomical
tables, and to predict the times and movements of the sun, moon and planets. Some of these purposes nowadays would be classified as astronomy.

The reproduction,
publication, modification,transmission or exploitation of
any work contained here in for
any use, personal or commercial,
without my prior written
permission is strictly prohibited.
All rights reserved.
.......
.......
* WISH * YOU * ALL * THE * BEST *

An architecture that seems far from that us Westerners we expect to see in India.
It looks like a modern abstract sculpture.
Have a good day.
Pierre.